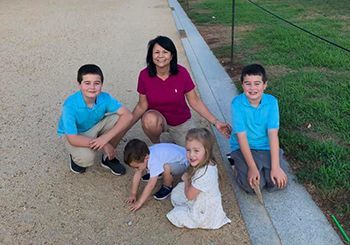 Although Suzanne values her role here at House of Printing more than any other opportunity she's encountered, her path to printing has not always been clear. As a young girl, Suzanne had hoped she would one day open her own dress shop. She continued on with this dream by working at a department store as a salesperson while studying through high school and college. Following her studies at Angelo State University, Suzanne seized an opportunity in Midland and made the move.

Shortly after relocating, set up on a blind date, Suzanne and David met and fell in love. While raising their two daughters, Suzanne worked as a commercial and personal insurance sales representative for Liberty Mutual. In 1993, she and David opened the doors of House of Printing. While still employed with Liberty Mutual, Suzanne worked after hours at the printshop until 1999 when she joined our team full time as co-owner.

Though Suzanne is happy to work as accounts manager as well as oversee employee relations, you will often find her greeting customers at the door with a big smile. She says her favorite part of this job is helping clients design projects that will, in effect, become a big part of their reputation. Though it is a far cry from a high end dress shop, Suzanne is still able to fulfill her goal of helping customers look their best!